The data for this model is usually a couple months in arrears and as of February 21, 2019 the probability for a recession is 0.80%.  That is consistent with last month.

By plotting 19 key economic indicators, the BaR Analysis Grid© clarifies current economic conditions and signals how near the economy is to a recession. The red and green squares are different calculations of the average for all the plotted points. It indicates the overall health of the economy.  If one of those squares hits the area shown by a light red rectangle, that would indicate the possible beginning of a recession. 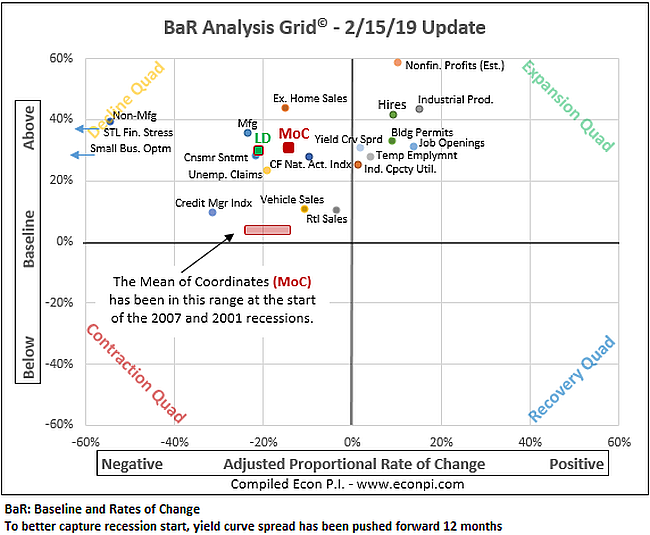 There is a lot of data illustrated on the chart, but as of February 15, 2019 the average has not triggered the start of recession. It has moved significantly over the past three months, but has stabilized in the last 30 days.  As a result my equity strategies shifted to a slightly more defensive strategy for 2019 (moving more weight to the health care, utilities and consumer staples asset classes).

Based on the data from this report, as of February 21, 2019 it appears that we are still in the late recovery phase and could be entering the early recession phase in the next couple years.